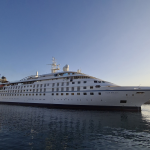 Melbourne is the coastal capital of the southeastern Australian state of Victoria. At the city’s centre is the modern Federation Square development, with plazas, bars, and restaurants by the Yarra River. In the Southbank area, the Melbourne Arts Precinct is the site of Arts Centre Melbourne – a performing arts complex – and the National Gallery of Victoria, with Australian and indigenous art.

Burnie is a port city on the north-west coast of Tasmania. When founded in 1827, it was named Emu Bay, being renamed after William Burnie, a director of the Van Diemen’s Land Company, in the early 1840s. Burnie was proclaimed a city by Queen Elizabeth II on 26 April 1988

Wineglass Bay/Coles Bay is an Australian town on the east Coast of Tasmania 192 km north-east of Hobart and 173 km south-east of Launceston, being the main entrance point for visitors to the Freycinet National Park.

Hobart, capital of Australia’s island state of Tasmania, sits on the River Derwent. At its fashionable Salamanca Place, old sandstone warehouses host galleries and cafes. Nearby is Battery Point, a historic district with narrow lanes and colonial-era cottages. The city’s backdrop is 1,270m-high Mount Wellington, with sweeping views, plus hiking and cycling trails.

Dunedin is a city in New Zealand, at the head of Otago Harbour on the South Island’s southeast coast. It’s known for its Scottish and Maori heritage, Victorian and Edwardian architecture, and a large student population. Hiking and cycling trails crisscross the dramatic landscape of the adjoining Otago Peninsula, home to colonies of albatross, sea lions and rare yellow-eyed penguins.

Lyttelton is a port town on the north shore of Lyttelton Harbour, at the northwestern end of Banks Peninsula and close to Christchurch, on the eastern coast of the South Island of New Zealand. According to the 2013 census, Lyttelton had a usual resident population of 2,859.

Wellington, the capital of New Zealand, sits near the North Island’s southernmost point on the Cook Strait. A compact city, it encompasses a waterfront promenade, sandy beaches, a working harbour and colourful timber houses on surrounding hills. From Lambton Quay, the iconic red Wellington Cable Car heads to the Wellington Botanic Gardens. Strong winds through the Cook Strait give it the nickname „Windy Wellington.“

Picton is a town on the north coast of the South Island, in New Zealand. It’s known as a gateway to the islands and inlets of the Marlborough Sounds. The Edwin Fox Maritime Museum is a 19th-century former convict and cargo ship. EcoWorld Aquarium shelters and rehabilitates native animals such as tuatara reptiles and blue penguins. Nearby, the Queen Charlotte Track traverses coastal forest, skyline ridges and bays.

Tauranga is a harbourside city in the Bay of Plenty region on New Zealand’s North Island. It hosts historic buildings like the Elms Mission Station, an 1847 Georgian-style home. A bridge over the harbour connects Tauranga to Mount Maunganui, a beach town with hot saltwater pools and an extinct namesake volcano with winding walking paths. Offshore is the active volcano White Island, accessible by helicopter or boat.

Auckland, based around 2 large harbours, is a major city in the north of New Zealand’s North Island. In the centre, the iconic Sky Tower has views of Viaduct Harbour, which is full of superyachts and lined with bars and cafes. Auckland Domain, the city’s oldest park, is based around an extinct volcano and home to the formal Wintergardens. Near Downtown, Mission Bay Beach has a seaside promenade