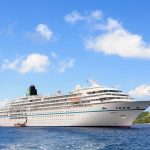 Villefranche-sur-Mer is a commune in the Alpes-Maritimes department in the Provence-Alpes-Côte d’Azur region on the French Riviera and is located south-west of the Principality of Monaco, which is just west of the French-Italian border.

Cádiz is an ancient port city in the Andalucia region of southwestern Spain. The home of the Spanish Navy, the port boomed in the 16th-century as a base for exploration and trade. It has more than 100 watchtowers, including the iconic Torre Tavira, which was traditionally used for spotting ships.

Funchal is the capital city of Portugal’s Madeira archipelago. It’s backed by hills, and known for its harbor, gardens and Madeira wine cellars. The centuries-old Funchal Cathedral, which mixes Gothic and Romanesque styles, is notable for its carved wooden ceiling.

Bridgetown, the capital of Barbados, is a port city on the island’s southwest coast. It’s known for its British colonial architecture, 17th-century Garrison and horseracing track. Near the central National Heroes Square, which fringes the Constitution River, Nidhe Israel Synagogue and its museum explore the island’s Jewish history.

Scarborough is a city in Trinidad and Tobago, on the southern coast of the island of Tobago. The Lower Scarborough area is anchored by Scarborough Market, with vendors selling fresh produce and clothing. Close by are the indigenous trees and shrubs of Scarborough Botanical Gardens.

Kralendijk is the capital of Bonaire, a Dutch island in the Caribbean Sea. Colorful architecture dots the shopping street of Kaya Grandi. The Bonaire Museum displays archaeological finds, shells and old photos. Off the coast is Bonaire National Marine Park, with a coral reef sheltering tropical fish.

Oranjestad is the capital of the Dutch island of Aruba, in the Caribbean Sea. Near the marina, the 18th-century Fort Zoutman and the Willem III Tower, formerly a lighthouse, house the Historical Museum, which chronicles the island’s past. The Archaeological Museum displays indigenous artifacts dating back as far as 2500 B.C. Along the waterfront, L.G. Smith Boulevard is dotted with boutiques and shopping malls.

Cartagena is a port city on Colombia’s Caribbean coast. By the sea is the walled Old Town, founded in the 16th century, with squares, cobblestone streets and colorful colonial buildings. With a tropical climate, the city is also a popular beach destination.

The San Blas Islands of Panama is an archipelago comprising approximately 365 islands and cays, of which 49 are inhabited. They lie off the north coast of the Isthmus of Panama, east of the Panama Canal. A part of the comarca Guna Yala along the Caribbean coast of Panama is home to the Kuna people.

The Panama Canal is an artificial 82 km waterway in Panama that connects the Atlantic Ocean with the Pacific Ocean. The canal cuts across the Isthmus of Panama and is a conduit for maritime trade.

Puntarenas is a port town on Costa Rica’s Gulf of Nicoya. Its Casa de la Cultura is a cultural center with a theater and art gallery. On the main boulevard, Paseo de los Turistas, Parque Marino del Pacífico includes an aquarium and rescue center with seahorses, turtles and crocodiles.

Puntarenas is a port town on Costa Rica’s Gulf of Nicoya. Its Casa de la Cultura is a cultural center with a theater and art gallery. On the main boulevard, Paseo de los Turistas, Parque Marino del Pacífico includes an aquarium and rescue center with seahorses, turtles and crocodiles.